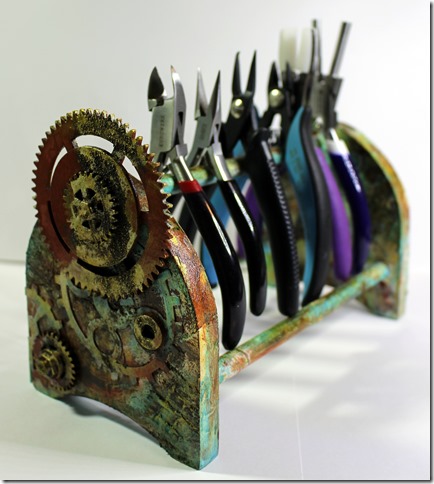 I have been meaning to decorate my jewellery plier stands for ages and finally got them finished. 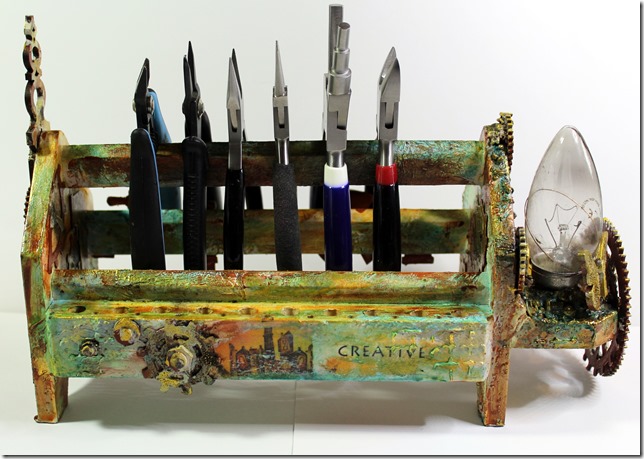 I had a bit of a problem with these in that they started off as a plain varnished wood surface. I initially coated them with white Gesso with a view to painting them with acrylics. However, the Gesso did not bind well to the varnish layer – eek! All ideas were halted. These need to be fairly robust and a tonne of flaky chips after a short use was not what I wanted!

I then discovered Powertex and yay, I would be able to rescue and decorate my plier stands after all. Coating the entire surface with rice papers and torn kitchen towels would create a tough protective skin over the surface and prevent the feared chipping off of the base layers. 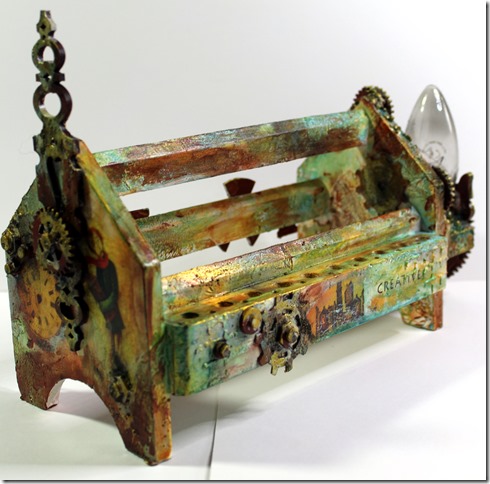 HOW IT WAS DONE 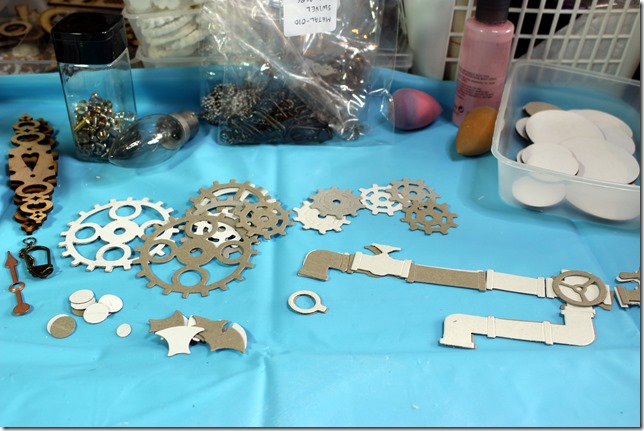 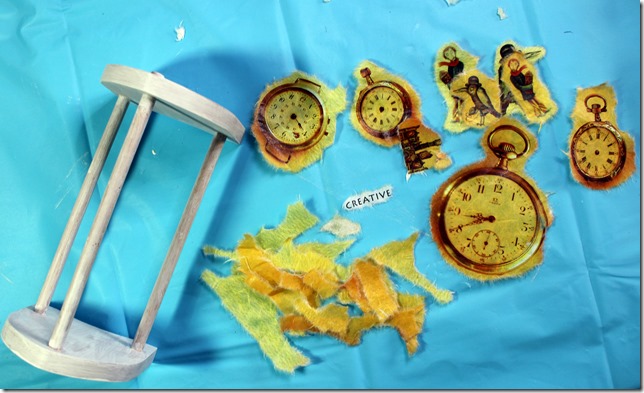 I tore out images from Creative Rice Paper (Powertex). This particular sheet seems to be out of stock but there is a similar Victorian Steampunk Paper available. I also separated layers of kitchen paper and tore them into pieces to coat the surface. This would add texture and a protective layer.

First I applied the torn decorative papers using Easy Coat Mat Medium. Ivory Powertex was then painted on to blend in the image edges.

Next layers of kitchen paper were bonded all over the surface. Some were glued down with Ivory and some with Terracotta Powertex. Die cut card embellishments were also coated with Powertex and glued down.

Texture was added by applying Easy Structure Paste through a texture stencil.

I also had a try at the rust technique. I mixed some Rusty Powder into Ivory Powertex along with a few drops of white wine vinegar. This was painted and dribbled over the surface (extra powder sprinkled on top) and spritzed with water and vinegar before leaving overnight to develop. I spritzed at intervals, several times. I avoided the areas that will be in contact with my pliers. 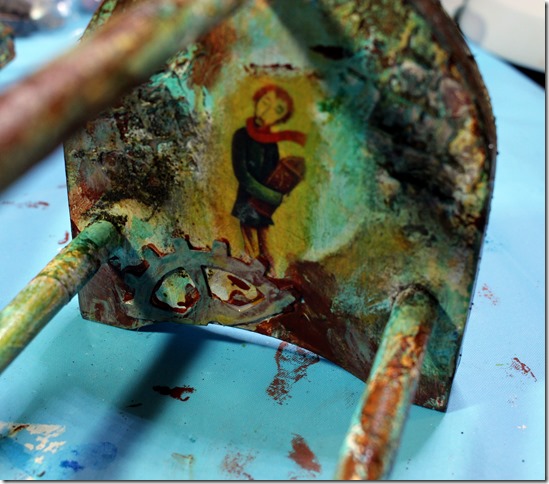 Next I brushed over and added colour using Acrylic Inks in Tangerine, Egg Yolk, Aqua and Metallic Gold.

I also applied a little gold Pebeo Gilding Wax on some areas. When fully dry and cured (I left them for 3 weeks) I coated the surface with Easy Varnish to fully seal and protect. 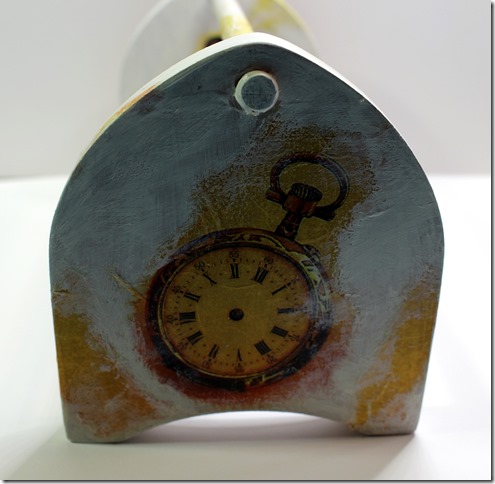 I have included lots of images of how all the surfaces were built up. 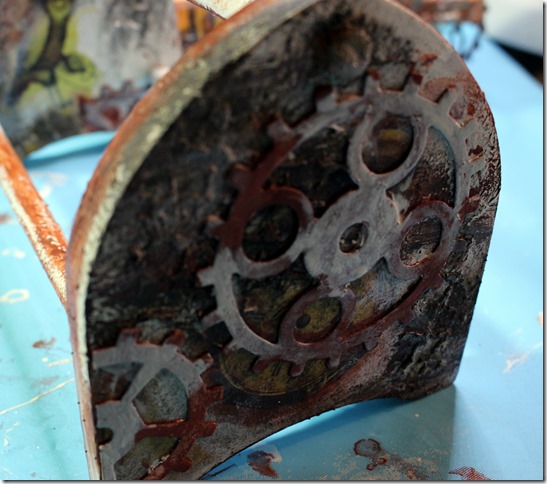 Texture and die cut cogs have been added.

Side finished with stronger thick greyboard embellishments. Any large embellishments protruding from edges need to be strong (thinner card would be prone to warp and bend).

I started with a larger clock image on the other side. 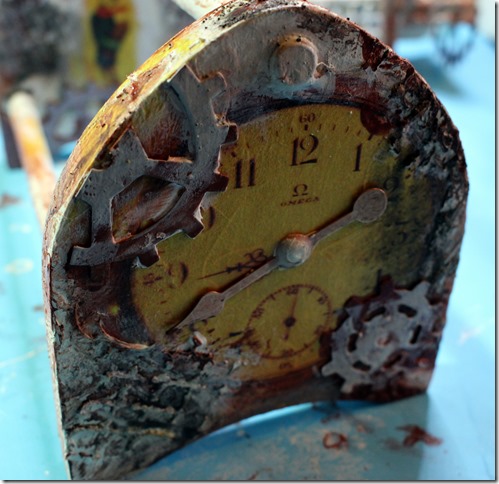 Die cuts and texture added plus a metal clock hand for dimension. 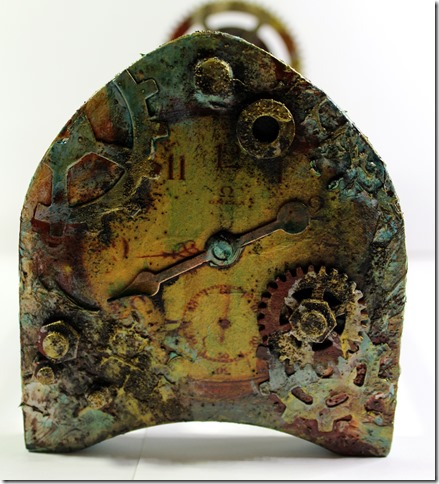 Texture and layers built up. Waiting for the rust to develop. 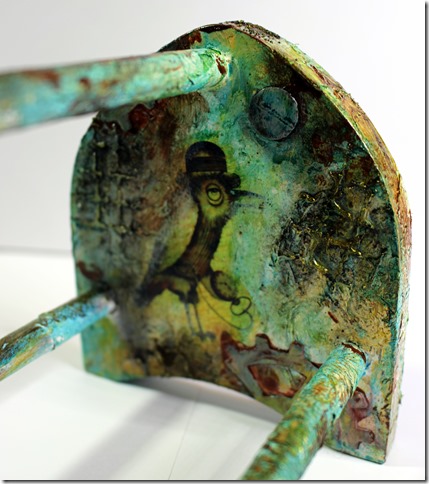 Building up the layers of transparent colour makes so much difference.

The second plier stand started off in the same way.

Just loving the gorgeous layers of texture and colour.

I used several layers of the die cut pipework together to make them thicker and stronger on this side. 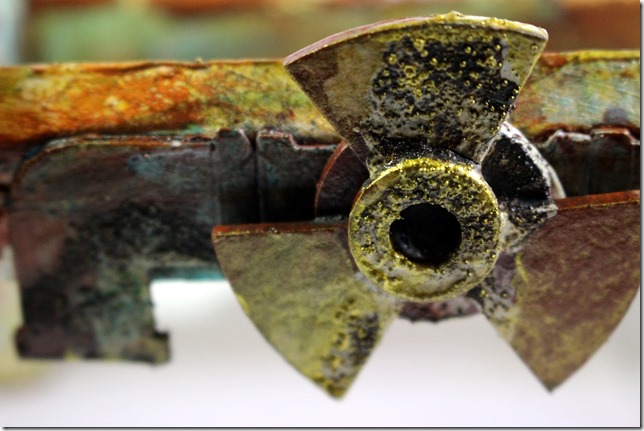 Wooohooo – this is soooooo yummy (or is it just me – tee hee). 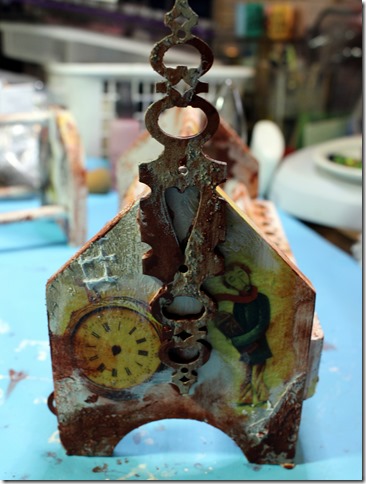 I used an MDF keyplate (Powertex) to embellish this end.

The final colouring makes such a difference.

The final side had a couple of little storage wells. I won’t really be using these so a perfect place to embellish with larger items.

I had fun adding recycled light bulbs, screws and bits of chain etc. I used structure paste and Powertex treated kitchen paper as a 3D glue to hold things in place. 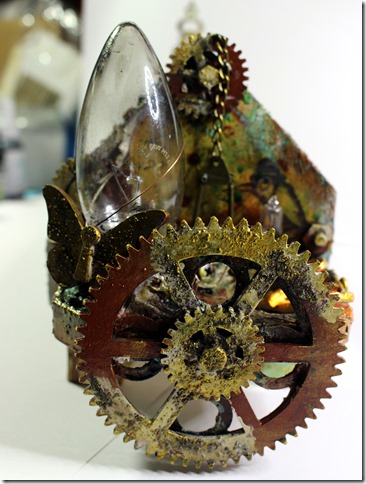 Initially I had added a thinner die cut cog to the end but it wasn’t really strong enough. Here I added another thick greyboard cog over the first. Much more practical. I also added a small MDF Butterfly.

Here you can see more of the Steampunk treasures added. I also added some 3D Sand and Balls.

Love this Steampunk birdie peering out.

Well I hope that all these pictures have not overwhelmed you. I wanted to show how all the stages were built up. It also shows the stages that look awful, perhaps where a beginner might give up! Remember, if it all goes wrong just keep applying colour, inks or coloured varnishes. If this fails and you are really not happy – just paint over the whole thing with a base colour of Powertex and start again.